Ann Perrin – stage name Ann Field was this really me?

A couple of weeks ago a friend rang to tell me they had seen my name on a playbill on a programme about Morecambe and Wise on ITV 3.

My stage name was Ann Field and I do remember Hulme Hippodrome and chatting with the rest of the cast in a coffee shop before the show! I was about 16 with a marionette cabaret act and often travelled from London to provincial theatres in Variety. Most of the time we had no idea who else might be on the bill until we got there,

I found a repeat of the T.V. programme and there I was ‘Ann Field and her little people’ Little people’  not sure who thought of that daft title? But I was reminded that the famous pair had completed a not too successful TV series and were back on the road in Variety. 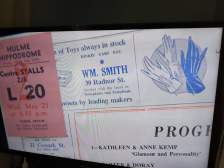 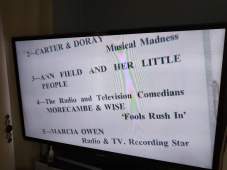 Recently, looking through some archive boxes, I discovered newspaper cuttings that indicated I was once performing at Leeds City of Variety and my mother was performing in Newcastle the same week!

No wonder I was never taught to make cakes!

A second surprise in June.

I once had a temporary job typing invoices for Goodlass Wall Company. (we used to call it resting in show business) when my father suddenly appeared one lunch time with my basket of marionettes. Apparently I had to leave immediately for Skegness. I had been booked to appear in ‘Nite Life New York’ because someone had dropped out of the show!

When I got to there I discovered that as well as my marionettes, I was expected to perform in sketches with Bobby Dennis the star of the show!

Oh dear, I had to learn lines and stage directions in a couple of hours. Luckily with the help of two stagehands to sort out endless entrances stage right, and stage left, I got through the first night.

The show toured various theatres in the Midlands and ended up in Bognor on the Pier. But the skimpily clad stage girls were considered to be far too racy for family audiences and the shoe by was closed by Wednesday!

Gradually things got better and I did cabaret including one at the Cafe Royal  and a summer season at Eastbourne Hippodrome. Later I tried acting and got a role in a film called Tom Boy taking a tiny yacht through the canals of France.

I’ve not flown to New York
but I’ve taught gypies to read
and watched Rosie bottle feed
a newborn goat.

I’ve not gone on a cruise,
been seated at the Captain’s table
but I’ve crossed the Channel in a tiny
yacht with some tow bit actors
who promised they could sail.

I’ve not run barefoot over hot coals
but I’ve wandered the Argonne Forest
dodging unspent ammunition
giving thanks for simple being alive.

My parents were involved with Tufty and Road Safety Shows in London schools and at one point we all did New Faces on TV and appeared on Cliff Richard’s Saturday Spectacular at the Palladium.

We made and operated the puppets for  ‘Oh What a Lovely War’on Brighton’s West Pier and did all the puppetry for the pilot for the Telegoons.  I was a Telegoon puppeteer for 15 episodes.

I was still working as a puppeteer years later while also studying to be a teacher. I was a single parent by then and it was only due to a serious accident that my career in show business ceased. Sadly I had to send my contracts back to The Arnold Stoker Agency who had always supported me. Luckily I qualified as a teacher with a distinction in art so when I was a lot better taught instead.

Years later when I moved to the South Coast intent on becoming a better a poet. I ended up doing Stand up comedy instead in various venues in Brighton and ran puppet workshops in Saltdean Library! Oh dear a butterfuly brain!

I guess having been born in the blitz in London I have always been a wee bit surprised to have survived at all.

This entry was posted in Ann Perrin stage name Ann Field, Ann's memoir, Ann's poems, Becoming a poet, Cheer yourself up on a dull day, Finding my feet in Brighton, Marionette, Photography and tagged 'Oh What a Lovely War', Arnold Stoker agency, Art, blogging, Bobby Dennis commedian, life, Morcambe and Wise in Hulme., Photography, poetry, Puppetry, Puppets in the Park, Saltdean Libary, The Telegoons, The Variety Theatre in the 50s. Bookmark the permalink.

2 Responses to Ann Perrin – stage name Ann Field was this really me?