Creativity – lockdown – but everything is the garden is lovely! 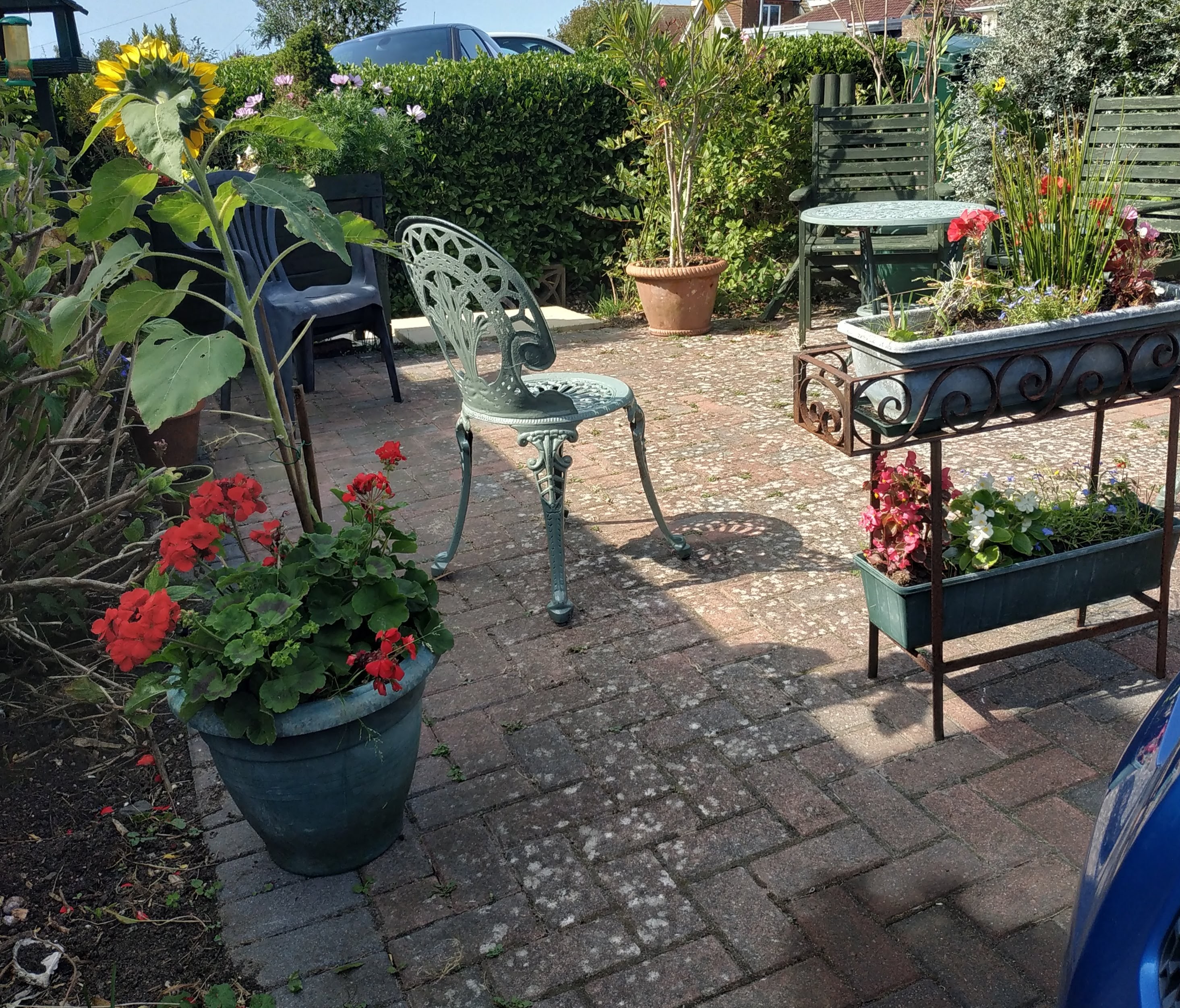 We created a courtyard at the front of the house,  with chairs, a table, a trough full of flowers and a bird feeder. It was partly in an attempt to ensure we could have two or three friends round and be suitably socially distanced. But now even that advice has changed!

But I can at least see sparrows competing for seeds, through the  gaps in the window blind..

In our re-designed front garden neighbours and dog walkers stop to say hello and when the sun moves from the back garden to the front about teatime my partner and I sometimes have a glass of wine watching the sunset.

But how I miss family and friends! Shopping trips, walks, meeting fellow poets in the Library, our group was called Grasshoppers. All those trips up to London to galleries.  Visits to Jean and Mado on their farm near Toulouse.  Memories come flooding back especially of the time we all came across an abandoned charcoal burners site.

A few years later at Arvon I wanted to write a poem about the drama of those people walking so far from home and living and working as they did at the time of the Great War. I was very much a novice poet and Ian Duhig was one of the tutors.  He challenged  me to try a sonnet. I wasn’t at all sure but when I took a draft to his tutorial feeling very out of my depth he just kept saying “so what do you want to say?”   I read my poem line by line. and he suggested one or two changes.  I found the notes he made the other day and still treasure them.  He popped up in the Guardian recently about writing for The Irish Times.

I know I have put this poem up  before but finding the notes prompted me to do it  again and to treasure his wisdom  “So what do you really want to say?” 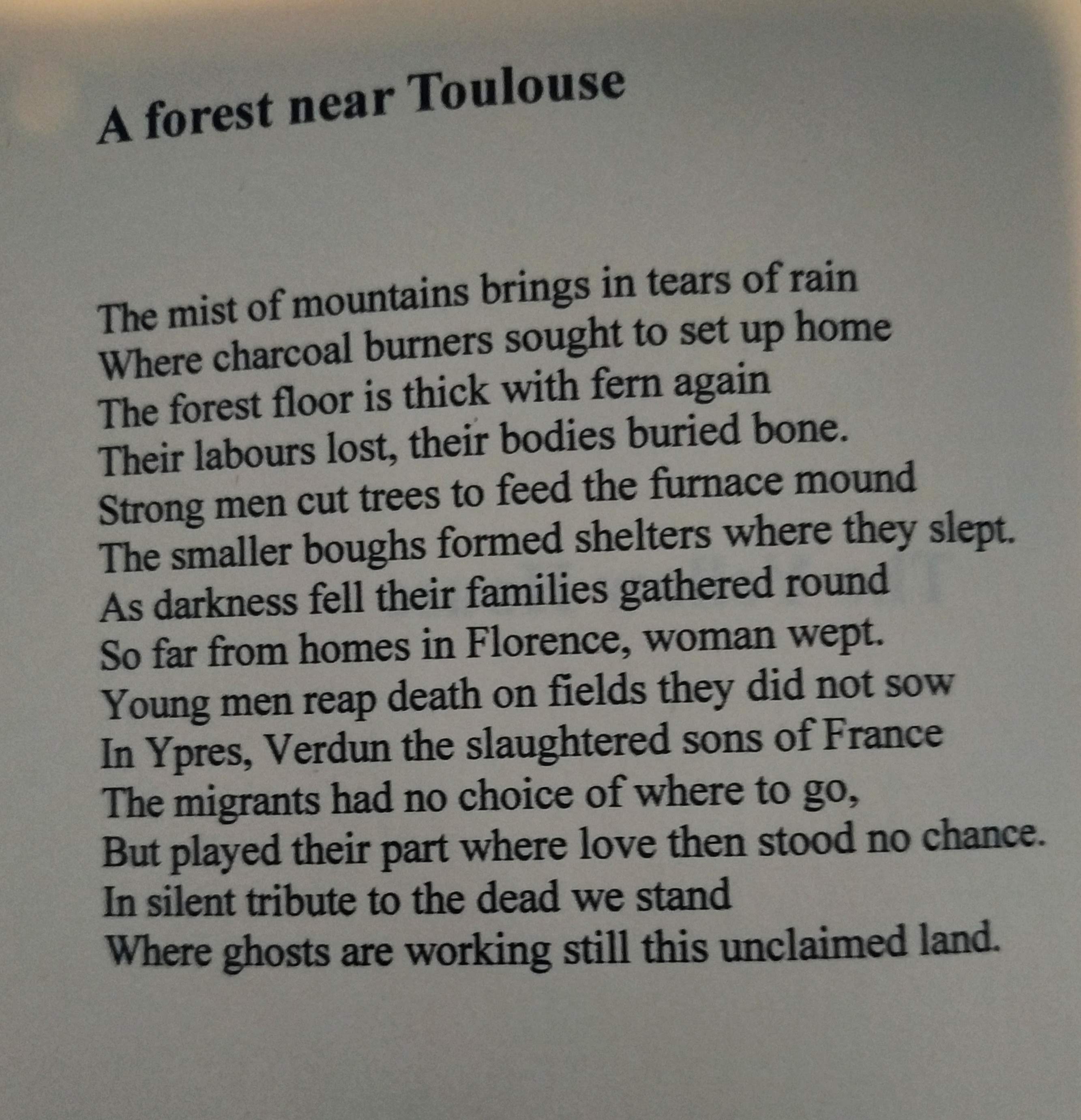 I love London Drawing, I don’t subscribe to their wonderful ongoing courses on everything from portraits to botany but love their one off workshops. Very good too  that they require a donation instead of a set fee. So far I have done one theatre workshop, where the models were constantly moving and engaging with drapes and fabrics.  The second one was about a traditional method of drawing from India. The Zoom was in fact in India, with the artist/tutor happily chatting and sharing. She  demonstrated the main features of the designs. She showed us how to draw a fish but this was tip of the iceberg and thoroughly enjoyable.

I have recently linked father’s original film footage to one of my poems and put it on youtube  Paris 1948 and Poem – Music From Another Room  lasts three minutes.

The visit to Paris came about thanks to Grandpa. He had returned from the Great War having been gassed and shell shocked and despite two years of hospitalisation he  returned to the family fruit shop in Goodge Street where he worked part – time.  Much later after the Second World War he gave each of his children a modest lump sum for house deposits.  Auntie Joyce and family headed to Potters Bar.  Uncle Dick took his young family to Hayes and father took us to Paris!  My mother was the youngest of the three and it seemed possible we were destined to live in our grandparents’ house for some years not least in a caring capacity.

Still struggling with film of Appleby Fair in the 80’s! At least completed transferring it from tape to digital and have found some old traditional songs. It will be the next one  to be finished, but in the end its all about staying motivated!

Back in the garden just in time for Autumn colours, Virginia Creeper reminds me of decorating baskets for displays of fruit for the local church each year. After a Harvest Festival service ours and the contributions of others would be distributed to the elderly. We were lucky Grandpa worked in the family greengrocers because we often had fruit, especially bruised apples and pears that could not be sold.

Trying to work out which variety will produce the very last rose of summer.

Just before the lockdown started all over again managed to get to my beach hut and swam in the sea a few times!   Then few weeks ago fell down the stairs which was not too clever!  Luckily only pulled a tendon or two, but had to stay rested for a couple of weeks. Fine now, so back to whatever life comes up with!

Nearly resorted to getting my butterfly tapestry out. I’ve only completed one butterfly in 30 years. It’s a sort of emergency desperation activity. When my mother saw I had it out she used to say “Oh dear now we are in for trouble.” Not for long, hence only one butterfly!

Like Loading...
This entry was posted in 'The Puppeteer's Daughter' Ann Perrin, Ann's memoir, Ann's photography, Ann's poems, Arvon, Cheer yourself up on a dull day, Gardening and tagged Arvon, Gardening, London Drawing, Paris 1948 and a poem. Bookmark the permalink.

3 Responses to Creativity – lockdown – but everything is the garden is lovely!