Posts – creative non fiction,  poetry, articles, photography, events in Brighton and London, the natural world, progress in my garden, allotment, trying to place my marionettes, my films and sometimes a touch of home-spun philosophy.

I moved to Brighton ten years ago with my partner, having spent most of my life living and working in London. I had also cared for my mother for the last ten years of her life and when she died I was at a very low ebb, so I created a new garden, started this blog.

This link will take you to the latest post.

httpsnot://annperrin.wordpress.com/finding-my-feet-in-later-life/ for latest post.–
–
Further details of books and films etc as follows.

Poems that explore the complexity of life as the daughter of marionette makers and performers. But there are also poems concerned with life, love and loss, the seaside, artists, allotments and the eccentricities of life.

Some of the poems were written during a residency in Postman’s Park in the City of London, thanks to The Poetry School ‘Mixed Borders’ and ‘Open London Squares Weekend.’

Available in City Books 23 WESTERN ROAD, HOVE and at the Open Art Cafe in Nevill Road, Rottingdean at £6.95 and available from Lulu and Amazon. Please click on the link at the side of this page to purchase.

The following endorsements are probably over generous but never mind.

‘Ann Perrin writes brilliant poems that fizz with originality, satisfying the reader’s heart as well as their head. Her work is frequently surreal yet, crucially, never strays far from poignancy. Its energy leaves you feeling revitalized and seeing the world afresh.’
–
Tim Dooley –
–
‘Ann Perrin is an original. Her memories of a world that is almost completely lost are coloured with wit and a vivid eye for detail. These are poems that resonate long after one has finished reading them.
–
Weaving Spells
–
He was a magician to us
weaving spells with wood and clay.
Other people’s dads went to work
and reappeared for supper.
–
Ours spent his days
and most nights
carving marionettes
in his cluttered workshop.
–
He was always engrossed
kneading clay or carving wood,
the music of Glen Miller blaring
from a battered radio.
–
We would clink through the chaos
with mother’s homemade cakes,
the smell mingling with the stench of glue
boiling on an ancient cooker.
–
Our faces shone with shy smiles
as his hand took the teacup.
He had been whisked away to war,
we barely knew him.-
–
We lived at Gran’s
and discovered him one day
in the hallway
with a battered trunk.
–

A soldier
in a coarse khaki uniform,
a clarinet in a case
and chocolate in his pockets.
–

I was very pleased to be chosen by The Poetry School three years running to be one of the poets in residence for London Open Squares Weekend.

We were each allocated a park or garden where we wrote our poems inspired by our surroundings, we read them to the public and created poetry related activities.   A selection of our work went into a Flicky book on The Poetry School’s website.

The following link will take you to some of my poetry

‘The Hole in the Wall’ –  a picture book/poem that I wrote and illustrated about twenty years ago. I could not get it published at the time but later made it into a film and put it on youtube.
–

–
The Dry Stone Walling Association discovered the film and asked if they could produce the book in colour and sell it on their site.

This link will take you to the Dry Stone Walling Associationwebsite where you can buy it for £2.00. A lovely book that fits in your pocket. Well recommended as a bedtime story, a teacher’s resource for classes on mini beasts and just for fun!

–
This following link will take you to poems some more of my poems for children.

‘Don’t Throw Away the Daisies’

Kiersty Boon  ‘This collection of poems, fully illustrated by the author, is a wonderful journey from a magical childhood of puppets and seaside towns.  The delicacy of the difficult stages of life and memories experienced are offset with humorous anecdotes and magical tales for young and old alike.’

When I was young I helped to write scripts for our marionettes, a family business. But I started writing regularly whilst bringing up my sons on my own. I worked part time. at all kinds of jobs but writing too became a way of earning some extra cash. I had loads of rejections but also got articles published in teaching magazines,  a poem in The Sunday Times magazine and two poems read on Radio 4.  I was accepted as a member of The Society of Woman Writers and Journalists.
–
Films, puppets, mini documentaries, poetry etc.
–
I’ve been on both sides of the camera. My first and only second feature film called ‘Tom Boy.’  Later discovered that I wanted to make films and became a member of a film club OVFM  –  won three minor awards. Some of the following films have had ten thousand views others 20!

I enjoyed making this film – just  wandering about in Virginia Woolf’s garden.

The website for our marionettes designed but my youngest son – I still love it.

Our marionettes have performed since 1949 in various productions, a puppet circus, singers, dancers, musicians, underwater ballet, plays and  extracts from the classics including ‘Alice in Wonderland.’ The picture on the right below is from a satirical series we made for Granada Television.

Finally as a family we made the marionettes and performed with them in the feature film ‘Oh What a Lovely War/ on Brighton’s West Pier.

Alice in Wonderland – was the hardest film I made. It’s my favourite and filmed a couple of years before my mother died.   In her late 70s she climbed up into the loft of my house in South London to operate some of the characters.  The boat scene in the garden  was a labour of love and took forever.

A puppet circus is a standard part of a marionette show. Our  shows were performed in prestigious London Hotels for parties given by the stars.  They also took place  in theatres, on piers and in schools.  On one occasion we performed at Buckingham Palace for a children’s party given by Her Majesty the Queen – in the 50s.

I made a film of a reconstruction of our circus several years ago, it was inevitably without the sparkling repartee from our clowns Nicky and Charlie (my mother and father).  My mother insisted we included two elephants that were not part of the original show.  Our circus had once included a strong man and an acrobat on a horse but they were among marionettes in a basket stolen from our garage in our family home in Highgate

In 2014  –  As part of their commemoration of the 100th anniversary of the outbreak of the Great War BBC South East filmed my efforts to conserve our marionettes that we performed with in the 60s in the film ‘Oh What a Lovely War’.

2015 – Our marionettes were part of an exhibition called ‘CINEMA BY THE SEA’  at the The Grange Museum and Art Gallery In Rottingdean 2015 -2016. 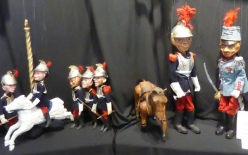 Note- these marionettes are still available for display along with !50 in storage from Variety, Cabaret, private shows etc. Including Popov the Russian Clown our Look alike Eccles from the Goon Show.—

After three years on the waiting list we were given a starter plot on The Weald – basically a small muddy field with an abandoned pond. We have tamed it over the years and I update my blog about it from time to time.

But to end on a much more cheerful note here is an attempt at a podcast with some of my earlier poems from the first book.

I try hard never to give up… easier said than done!

Even I cannot understand how at fifteen I had my own marionette act, touring in the Variety Theatre with stars such as Morecambe and Wise, Alma  Cogan, Max Miller, Bobbie Dennis, Graham Stark etc. Show business is creative and exhilarating, but also competitive and at times lonely.

My poems cover a wide range of topics in many different styles. Readings include Pighog in Brighton,  Rottingdean Fair, Lumin and the Troubadour Coffee House in London.
–

This is our white rabbit busy on a stint peddling poetry along the seafront before he collapsed from exhaustion!

Please note I seldom if ever mention other members of my family still in the land of the living!  I adore my grandsons all doing interesting things but it is really a case of respecting everyone’s privacy!

If you have got this far thank you for your patience.